In the latest in our series, profiling Irish and Northern Irish lawyers and jurists who have worked abroad, or are working abroad, we spoke with Sarah McGuckin, from Downpatrick, Co. Down. Sarah began her legal career as a Barrister in Northern Ireland before moving into international development, where she worked on rule of law and human rights issues in Southern Africa, Myanmar and the Balkans. Last year, Sarah moved back home to Ireland and transitioned into the tech sector, where she is currently working for TikTok on their Legal Policy Operations team. Her role is a bridging function between law enforcement and TikTok, to protect users in emergency situations. She’s also involved with IRLI, volunteering on its advisory fundraising sub-committee. 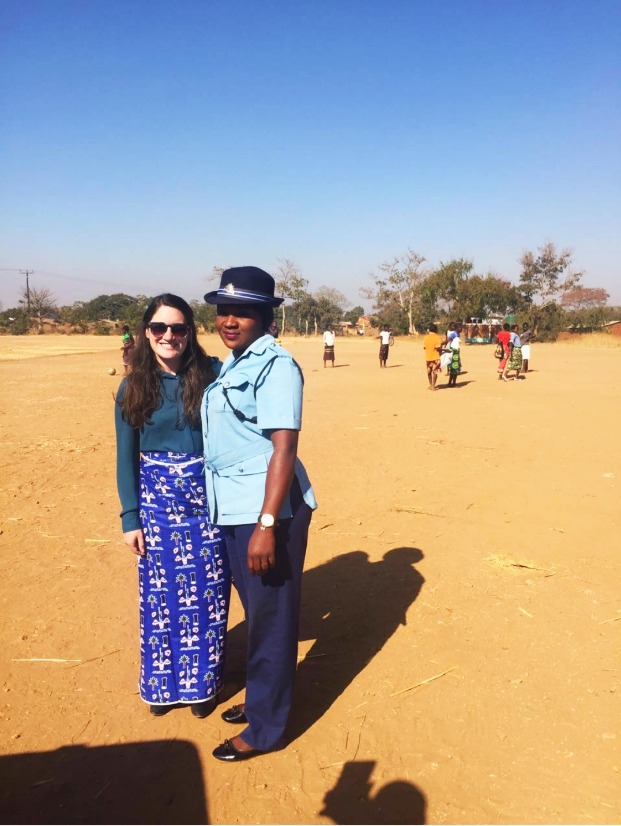 Sarah McGuckin at a legal aid clinic in a rural village in Malawi's Central region, with counterparts from the Malawian Police Service

SMG: I graduated from Queen’s University of Belfast (QUB) and then went on to qualify and practice as a Barrister-at-Law at the Bar of Northern Ireland. Whilst practicing as a Barrister, I achieved an MSSc in Mediation studies from QUB. This included a strong international focus and was the catalyst which sparked my interest in the rule of law and international development, opening my eyes to how strengthening the rule of law can safeguard basic rights and reduce inequalities.

Following my Masters, I was selected as a Rule of Law fellow on a US Department of State Global Fellows programme with the Irish Institute at Boston College, where I met truly inspiring practitioners, who were passionate about their work and who were committed to using their skills for the protection of the rights of others. This experience gave me the confidence to pursue roles where I felt I could make real impact on social justice challenges.

I took part in a national mock trial competition when still at school, which left a lasting impression. I loved the feeling of being in court, of standing up and debating, on a stage filled with drama. I recognise now that this was naïve and I had a very limited idea about what a legal career would actually look like. However, I recognised that law could be used to strengthen equality, and I knew I wanted to play a role in advocating for the protection of basic rights, particularly for the rights of women.

The world is currently witnessing meteoric change, and the way we communicate and use the internet is creating challenges we’ve never had to encounter. At the heart of this, is a debate about our fundamental rights and freedoms, one which I believe tech and social media companies must have a leading role in protecting. The impact of social media on our lives and on society is profound and tech companies can also play a really positive role in educating, monitoring and promoting human rights compliance.

It’s an exciting sphere to work in, one which I can bring my international experience to bear. I hope to find like-minded women, develop community and drive innovation, with equality and women’s interests at the forefront. I recognise that I am still very early in my career and I have a lot more to learn. My path, so far, has certainly not been linear and I expect many more twists and turns, as I continue to discover the multitude of ways that we can have an impact on the protection of our fundamental rights. 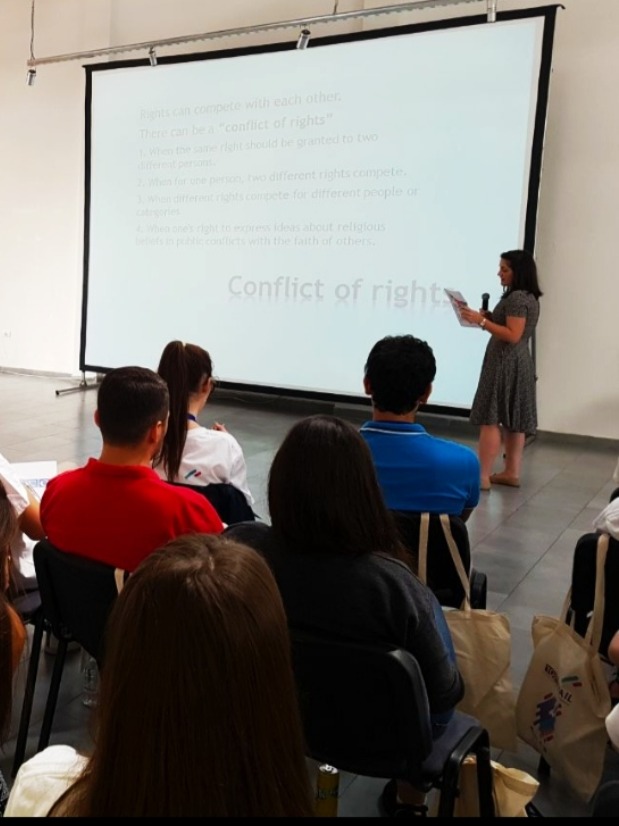 Barrister, Sarah McGuckin, giving a presentation on human rights at the OSCE (Organisation for Security and Cooperation in Europe) Youth Trail conference, which brought together young people from all over the Balkans to learn about governance and human rights

I have been lucky enough to work with, and alongside, some incredible women who are advocating for the protection of the most vulnerable, and pursuing justice in the face of the most insurmountable odds.

Recently, I was awe-struck by the courage of a colleague, an inspiring young Rakhine lawyer, who pursued a case for justice for a survivor of sexual violence which was perpetrated by a solider in the Myanmar military. This was the first case of its kind and paves the way for further prosecutions. She pushed forward, despite immense fears for her own safety, putting justice first. Her courage and bravery is both inspirational and humbling. This is something that spurs me on and reminds me why I got into this profession.

You have worked with IRLI in Malawi. Can you tell us about your work there?

Working with IRLI was a really eye-opening experience. Basic rights, which we tend to take for granted, such as the right to a fair trial, are out of reach for many in Malawi who come into conflict with the law. I worked with Malawi’s Legal Aid Bureau, supporting lawyers and paralegals who, despite chronic challenges both in terms of systemic barriers within the justice system, as well as severe resource shortages, are fighting hard to provide legal representation to the most vulnerable.

One case involved an 84 year old man who had been in pre-trial detention for 8 years without having been brought to court. He had been arrested, thrown in prison and forgotten about. Thanks to the dedication of the paralegals, who conduct legal clinics at prisons, this case came to light. We were able to argue successfully before the court that this case should be thrown out for want of prosecution. It was a powerful feeling witnessing the profound impact access to justice support had on this man’s life and the lives of his family, and the role I could play in assisting him in accessing justice.

You have also worked in Rakhine state. Can you tell us about some of your experiences?

In Rakhine, I worked with UNDP (United Nations Development Programme) on a rule of law assistance project. Rakhine is one of the least developed regions of Myanmar, scarred by years of inter-ethnic conflict and military violence, including the recent horrific atrocities against the Rohingya ethnic minority. I worked on improving access to justice for vulnerable groups, with a focus on redress for survivors of sexual and gender-based violence. This included developing NGOs to provide legal aid assistance to those most in need and training paralegals to act as community advocates. Legal information is extremely hard to come by, especially in rural and hard-to-reach areas, as well as in the numerous camps for internally displaced people living in Rakhine, so this service is a life line for many.

What sort of cases have you been involved with that you would like to discuss/feel are important?

One thing that particularly strikes me through my experience is how women are often disproportionately affected by inequality and blockages of access to justice. A case which always stays with me is the case of a young woman I met in Maula prison in Malawi. She had experienced a stillbirth, was subsequently charged with infanticide and remanded in custody where she remained for several years before IRLI, alongside the Malawi Legal Aid Bureau, was able to argue for her release on bail. Sadly, this is not the only such case and demonstrates the absence of understanding of reproductive health and women’s rights issues, caused in part by a lack of women’s representation at all points of the justice system, as well as the wider inequality that women face in political representation and access to services. 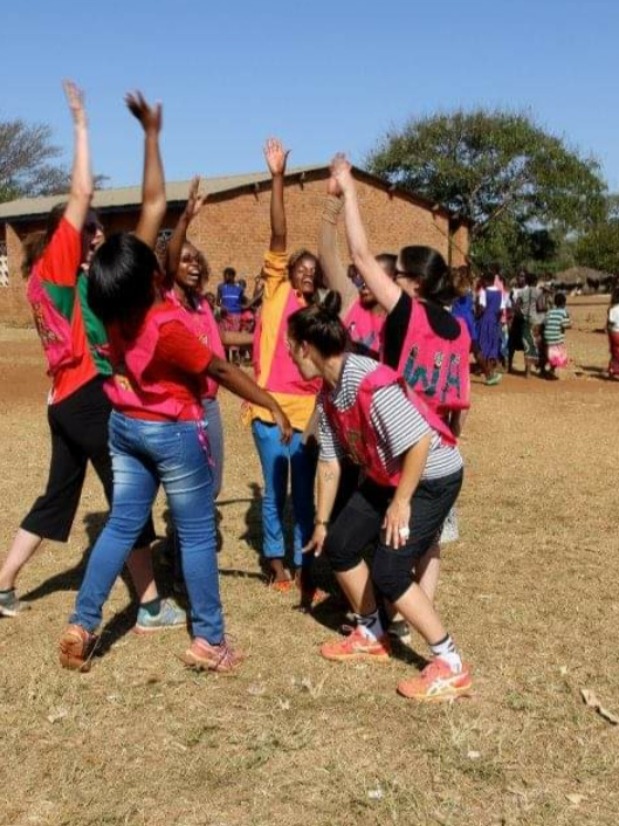 Sarah, playing a game of netball with participants at a legal awareness raising event outside of Lilongwe in Malawi

In my experience, as a young woman, establishing a career as a Barrister was wrought with many challenges due to the nature of the sector. I felt, I needed to up my game and gain valuable experience in other jurisdictions, so that I could develop professionally and come back with more to offer. However, once I started, I quickly decided to continue in this exciting field of international development. Working abroad is a huge privilege and has given me opportunities that I would never have had the chance to be involved with at home, from providing advice to government on draft legislation, establishing case law precedents and presenting before national committees. On a personal level, it’s also granted me the opportunity to experience many countries and cultures, adjusting to unfamiliar environments, meeting new people and cultivating friendships.

That is probably two-fold, personally I am quite an inquisitive person, so I am always actively pursuing new experiences and opportunities to learn. Professionally, I am interested in the use of law as a vehicle to pursue social justice, in particular gender equality, and how inequality has profound human rights implications. As lawyers, we are often told that our job is to advocate for those who cannot speak on their own behalf and while I agree that this is a huge part of our role, we should also put an emphasis on providing the opportunities and the platforms for women and marginalised groups to be able to speak on their own behalf.

I have been fortunate to have been surrounded by strong female role models and I have seen the impact that more diversity and inclusion can have on making a fairer and more just society. Ultimately, representation matters, both in terms of challenging the status quo as well as in increasing our knowledge base. By contributing one more female voice to the room, I’m still making an impact. Our responsibility is to raise up others and to create an environment where everyone can thrive.

Understand what drives you and pursue opportunities that will allow you to impact positive change. When I went to university, I was dead set on becoming a Barrister and was blind to all the other opportunities out there. I have been lucky enough to work in a number of sectors in different parts of the globe and am enjoying discovering the many available paths and incredible people you can meet along the way. Your career is not something you can really plan, or even predict. If there is an opportunity to make a positive impact, you have to grasp it.