In the latest in our series profiling the brilliant work being done by lawyers from across the island of Ireland, we spoke with Gráinne Mellon, a barrister specialising in public law, human rights and equality law at Garden Court Chambers in London. 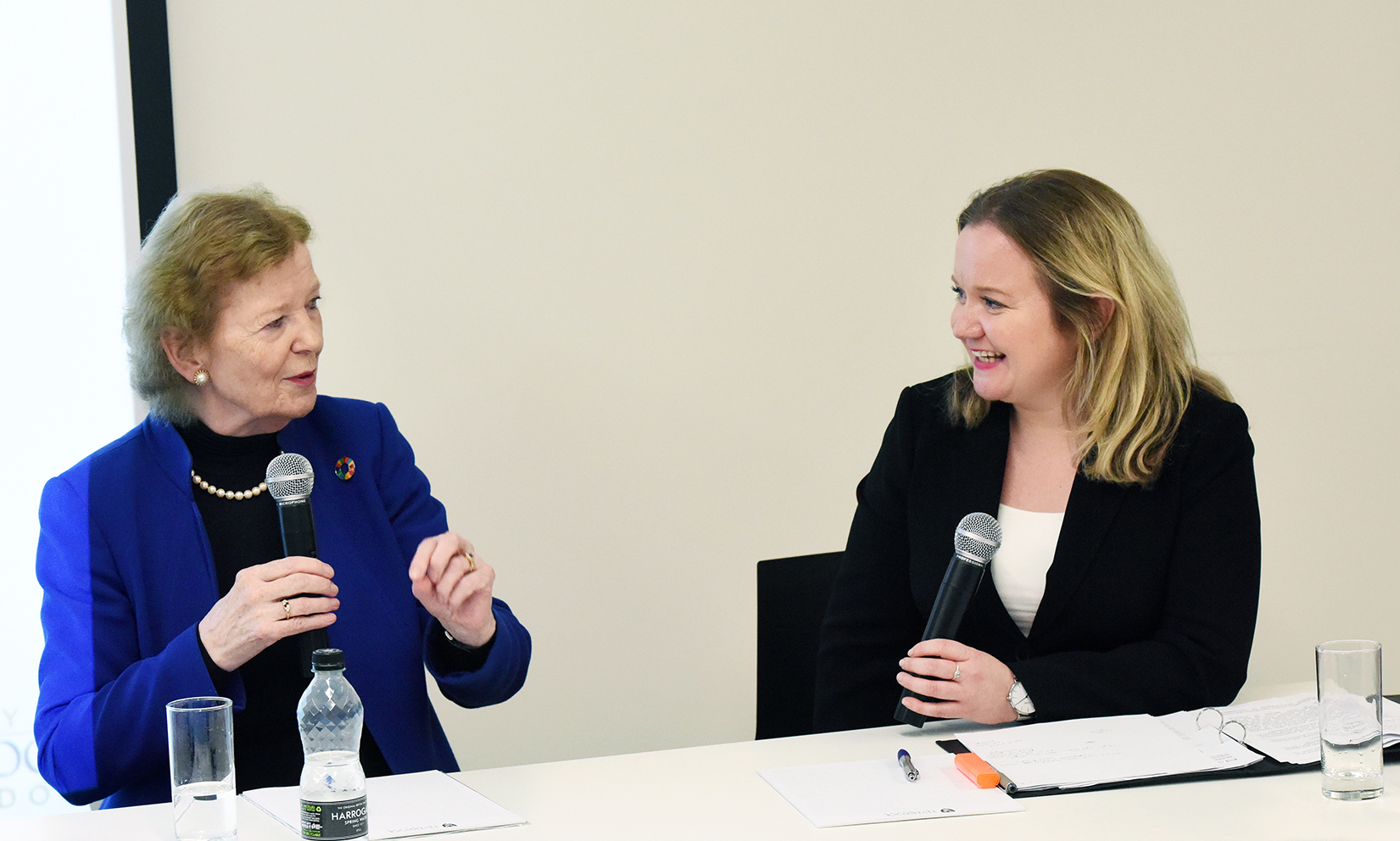 Gráinne Mellon speaking with Former President of Ireland Mary Robinson at an event organised by the London Irish Lawyers Association and the University of Liverpool in 2019.


Hi Gráinne – thanks for agreeing to speak with us today. To start, can you tell us a little bit about your background and training?

I grew up by the coast in Co. Derry and moved after school to Dublin to study law in Trinity. I loved those years, and enjoyed student politics and working with organisations like Washington Ireland Programme and Suas in particular.

I was really keen however to specialise and gain further expertise in human rights law, and so moved to London to do an LLM at the London School of Economics in International Human Rights Law. This was followed by some short stints with the European Commission in Brussels, the International Criminal Court in the Hague and the House of Lords in London, before joining the London Bar. I really valued the international experiences that I had during those years, and am glad I didn’t rush immediately into practice. I was called to the Bar in England in 2010. Shortly after that, I was called to the Bars of Ireland and Northern Ireland.

I had a strong interest in human rights from an early age, and was very driven by a sense of justice, fairness and equality. It is definitely right to say that I was much more driven by human rights – and making a difference – than I was by law itself or a desire, in and of itself, to be a lawyer. I saw law as a way to contribute, to advocate for people and as a vehicle for social change and that is still the way I see it today.

You work in human rights, civil liberties and equality law, can you tell us a little about this work, in addition to you working in an advisory capacity on international and human rights law?

I have a broad domestic practice in public law – lots of judicial review work – including in immigration, health, education and in children’s rights. I also work in civil claims, so for example discrimination claims under the Equality Act and claims under the Human Rights Act – often on behalf of children, young people, and those subject to immigration control. I love this work – it is tangible, often urgent, and gets real results for clients.

Alongside this, I also work on international human rights cases – for example, I acted on behalf of Reprieve in Ibrahim Halawa’s case concerning his detention and prosecution in Egypt, and am currently acting, along with Ed Fitzgerald QC, for Sean Binder on the international aspects of his prosecution in Greece arising from his voluntary work with refugees in Lesvos. I have also been involved with the Bar Human Rights Committee – which is the international human rights arm of the Bar Council of England and Wales – for over eight years and have been a Vice Chair for the last two years. This has enabled me to work on a wide range of human rights issues across the world – including most recently in Kazakhstan, Nigeria, Egypt and Turkey.

Finally, I have also in the recent past taught International Human Rights Law at the LSE, and was for a number of years a Fellow in the Center for Human Rights at LSE. I find this variety very helpful – particularly for human rights work – because it helps to maintain a broad, international perspective on the issues facing clients. I have learned a great deal not only from clients but from other lawyers and civic society actors working in often difficult circumstances around the world.

I want to achieve results for my clients – first and foremost – and where possible impact how the law applies more broadly to society and to marginalised groups in society in particular. Human rights cases often feel like exercises in compassion and fairness – much can turn on individual circumstances and facts – and I think a good advocate helps to bring those facts to life.

Many clients have made a big difference and their experiences or attitude quite often stays with me. I have mentioned some of the more high profile cases above, but the ones that also stand to me are the more day-to-day cases particularly in immigration proceedings and disability cases. For example, I represented a six year old deaf boy at risk of deportation, four young people who wanted access to education, and an elderly man who came to London as part of the Windrush generation, but later lost his home and spent his time riding buses at night while his immigration status was being resolved. He was extremely proud but also extremely scared and I found everything that had happened to him quite extraordinary. Every country has its own modern scandals that generations in future will look back on with disbelief.

Where are you working now, and why?

Currently, I’m acting for Sean Binder, in the international aspects of his ongoing prosecution in Greece arising from his voluntary work with refugees in Lesvos and advising a number of judges from Afghanistan who have fled the country and are now seeking refuge abroad. I am also working on cases to do with access to education and care for a number of disabled children and young people – the pandemic has made things a lot harder for those who were already struggling. 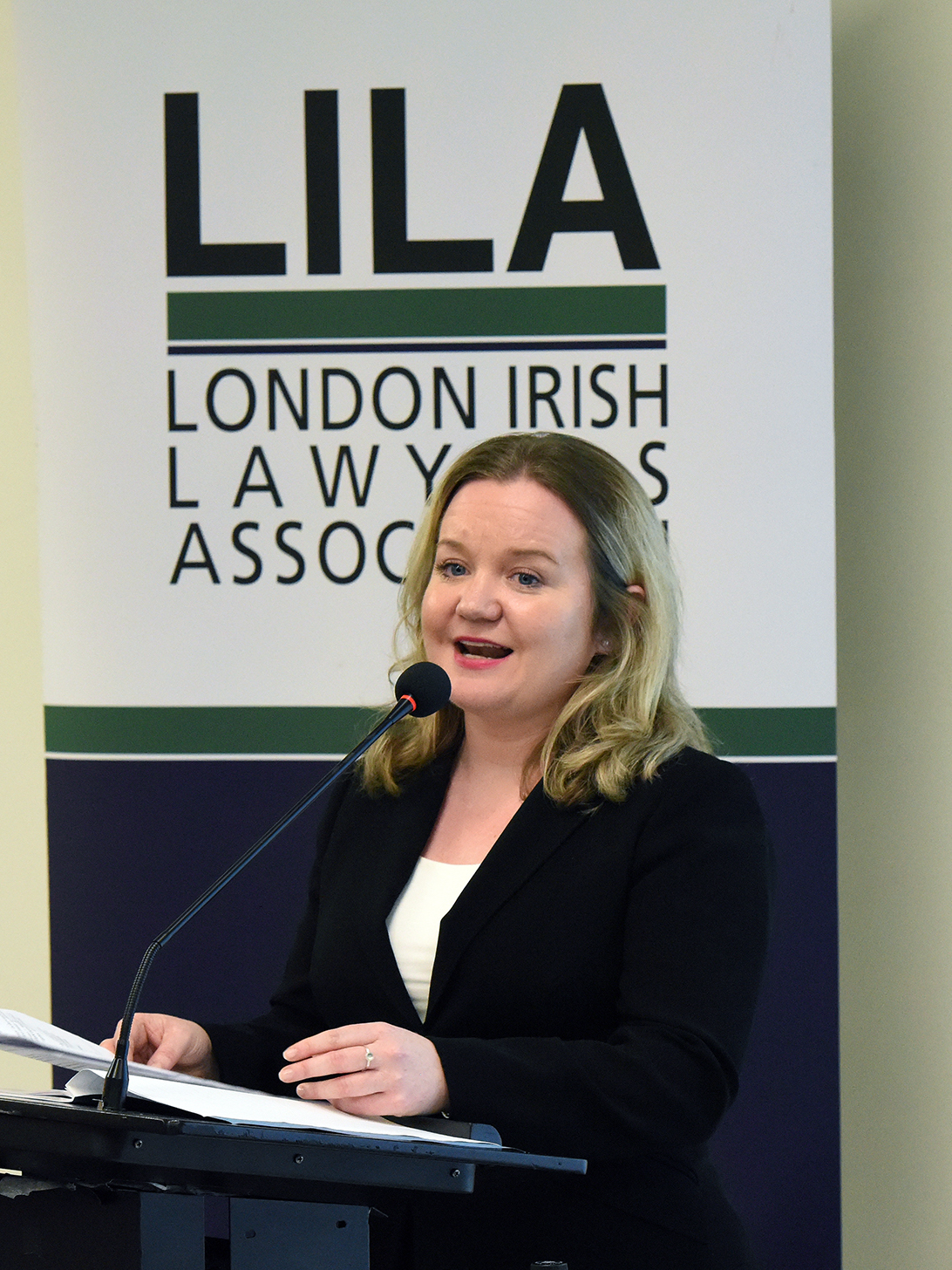 Why did you decide to bring your professional experience and knowledge elsewhere and work abroad?

I found it difficult to leave Dublin – but felt the opportunities in London, in particular for international work, and the structures in place at the Bar provided a lot of support in the early years in particular. One of the things I did shortly after I moved was to help relaunch the London Irish Lawyers Association as a network for Irish lawyers in London. It now has over 600 members and is a great way to make connections in London and keep connections to home. I really recommend it to lawyers who are keen to develop the London or international aspects of their practice. It was a real source of fun and community for me, especially in the first few years.

Do you have any advice to young people entering the legal profession?

I always encourage those entering the legal profession to go for what they want – most of the young people I talk to know what that is – but are worried about how or if it will work out. I understand there is a lot of anxiety and uncertainty – particularly at the Bar if you don’t have connections or money to fall back on – but it is possible. Big career choices are scary but I generally, and within reason, endorse making the brave choice – life is short – and particularly when we are young (maybe always) we can afford to take a few risks.

Well done to everyone at Irish Rule of Law International for everything you have been doing in recent years – it is great to think about ways Irish lawyers can contribute internationally, as well as to promote pro bono opportunities internationally. I applaud you all!