In the latest in our series profiling Irish and Northern Irish Lawyers who have worked, or are working abroad, we spoke with John Coughlan from Carlow town. John is working in Cambodia at the UN Office of the High Commissioner for Human Rights, having previously worked in Bangladesh with Rohingya refugees who had fled Myanmar. He studied law at University College Cork and afterwards did a Masters at the Irish Centre for Human Rights at NUIG, graduating from Queens University in Belfast.

John Coughlan, giving a talk with Samantha Power at Harvard

IRLI: Why did you become interested in legal work?

JC: I ended up doing legal work, not out of any real interest, but due to the fact that I didn’t know what to do. My brother was studying law when I was doing the Leaving Cert and it seemed as good an option as anything else. It was a fairly indifferent start; it must be said. I think I was mostly attracted to the fact that there were only 10 hours of lectures in a week.

At the risk of sounding cheesy, the aim is always to help people out in whatever way you can. That can take many forms in the field of human rights, most obviously when it comes to affecting the situation of individuals who have been the victims of violations or who are in danger of becoming victims. Working on the cases of individuals, you can see where there are successes, but when you work on broader issues, say torture or freedom of expression in a general sense, it is much more difficult to see impact. And often, things go backwards. In that respect, human rights work can be very challenging.

I worked on the Rohingya situation from 2017 to 2020 for the UN Office of the High Commissioner for Human Rights, beginning a few months after the genocide of August-September 2017. By the time I started in that role in December, six to seven hundred thousand refugees had already fled into Bangladesh from Myanmar, joining around a quarter of a million refugees who had been living there for over twenty years, since a previous attack by the Burmese military. I lived and worked in Bangladesh for around two years, near the camps. I don’t think anyone could be around those camps without being affected by the situation there. The nearly one million Rohingya there live difficult lives and the fact that the situation doesn’t appear to be close to any resolution makes it a heart-breaking place to be at times. 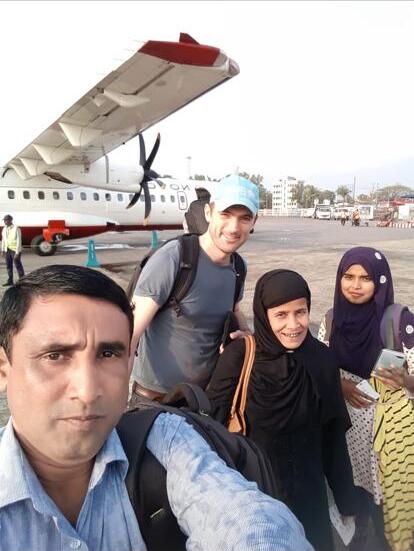 John, with two Rohingya community leaders from the camps in Cox's Bazar, Muhib Ullah and Hamida Khatun, and an interpreter, Yasmin.

Can you tell us more about your time in Bangladesh and the work you were involved in?

The situation in Cox’s Bazar (port city in Bangladesh) is extremely challenging. Bangladesh has been lauded for allowing one million refugees into their territory, but the environment there for the Rohingya is appalling. It is a poor country, but it appears that making life hard for the Rohingya is a policy of the government, which they seem to think will make people return home. But the Rohingya will not return for as long as the Myanmar military are in place and since the coup in Myanmar in February, their power is even greater than before. The military government in Myanmar is so unpopular that they may seek a populist cause to garner some public support. While the genocide in 2017 received international condemnation, it was widely supported in Myanmar, including by the recently ousted democratically elected government who defended the generals against criticism and condemnation. The military may see an attack on Rohingya remaining in Myanmar as their best chance at garnering popular support. It is a deeply troubling situation. The international community is aware of this danger but little to nothing is being done to prevent it from happening.

I had the interesting experience of working on both “sides” of the court if you want to look at it like that – prosecution and defence. It was interesting to see both perspectives, but the institution itself is heavily politicized and while it has undoubtedly had some landmark achievements, the reality of political control prevented it from fulfilling its full potential, where justice for the victims of the Khmer Rouge is concerned. But I do think the court played a role in helping Cambodia move on from that very dark chapter in its history.

You are now back in Cambodia, what are you doing there?

I work for the UN Human Rights Office here as well. Our work at the moment is mostly focused on COVID-19 or, most specifically, on the human rights consequences of COVID-19 restrictions. It is necessarily more difficult to impose the kinds of measures needed to combat COVID-19 in poorer countries – lockdowns, closing offices, preventing freedom of movement and so on. Cambodia has made significant strides in recent decades in terms of economic development but many here are still very poor and COVID-19 may pull even more back towards poverty. There was very little COVID here in 2020 but since February 2021, the situation is getting worse. But it is the financial and economic impact that is hitting people the hardest, with many out of work, struggling to pay rent, utility bills, and even to feed themselves. It has the potential to create a host of problems such as human trafficking, with people forced into terrible situations out of financial necessity. 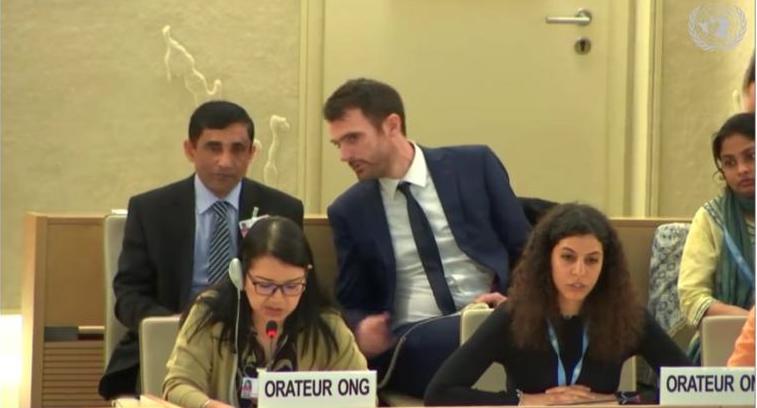 John with Rohingya community leader, Muhib at the Human Rights Council in Geneva

What sort of cases have you been involved in that you would like to discuss?

From an Irish point of view, my experience in Bangladesh with the Rohingya really brought home to me just how important it is for Ireland to meet its responsibilities, where providing international protection to victims of human rights violations and genocide are concerned. I am from Carlow and as it happens, there are just over 100 Rohingya refugees in my hometown. It is a small number but the change in circumstances for these people is hard to fathom. A friend of mine lived in a refugee camp in Bangladesh for 17 years. Now, his kids go to the school that I went to (actually, it is the girls’ school beside the one I went to) and the prospects for their lives are in almost total juxtaposition to their parents when they were the same age. The Rohingya in Carlow have been wonderful additions to the town, not that that should be a pre-requisite. They established the first mosque in the town, resurrected the town’s cricket club and have been hugely active in so many ways. It is a remarkably positive story and such a contrast to the situation I saw in Bangladesh. Not only is Ireland not accepting enough refugees, the treatment for new arrivals here is appalling. The only conceivable justification for the Direct Provision arrangements in Ireland is that someone decided that it might act as a deterrent to refugees and asylum seekers. It is a shameful arrangement that has no place in a developed country, especially one that prides itself on the warm welcome we claim to extend to new arrivals. 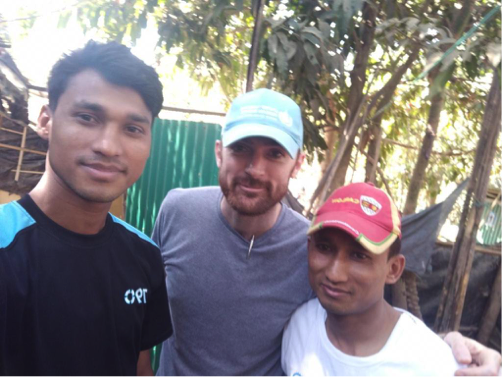 Human rights is challenging and successes are hard to come by. Many who work in difficult settings struggle psychologically from what they see and experience. I think this is an important thing to understand and people considering a career in human rights or a similar field should go in with their eyes open. But while you will see some really terrible things and some heart-breaking situations, you will also meet the most inspirational people. For the most part, these are not people working for the UN or for big international organizations, but generally people working for their own communities, usually earning very little money. In Cambodia now, it is local human rights activists who are working to raise money and deliver aid to the poorest people in society. Some of these activists have gone to prison in the past for advocating for human rights; suddenly they are working as humanitarians, raising money and bringing food to the doorsteps of those in need it. Just by supporting people like that, I feel as though I am doing something worthwhile and rewarding.